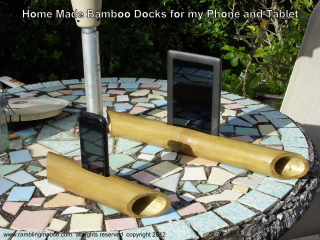 A while back a neighbor cut down a stand of bamboo that was as thick as your wrist.  I was able to take some of the scrap and cut it to size for a dock for my smartphones and larger ones for my tablets.

After taking the time to cut the wood and try the things out, I realized I really did want to finish the project by staining the bamboo inside and out with poly-seal.   Two coats later, they actually shimmer in the sunlight.  I may go another step further, but it really is pretty much “Furniture Quality” at this point.

Basically they work like the box that the drivers for your speakers for the stereo are contained in.  Give sound a box to bang around in and you get resonance and a louder, richer, and more directed sound.  More bass and better direction.  Since we’re talking about the tiny little squeakers inside of a tablet, they need the help.

Even the one that cracked worked nicely when I screwed it down to a stand to hold it together.  Now that I have all of these docks, five in total, I’m finding that they have their uses.  Why run ugly wires to the top of the medicine chest in the bathroom for speakers when you already have the phone playing music?  One of the docks lives there perched six feet above the ground.

The trick is to not make the hole where you drop the phone or tablet too large.  If the sound leaks through the top of the dock, it can’t be refocused out the ports on the side.  Since the Android phone I have and the iPhone 3G are almost identical in shape at the bottom, it works for all of my phones.

Other than that, unless I find more scrap bamboo or a reason to make more of these things, I’m probably done.  Nice little diversion of a project.  I got to the point where using mostly hand tools, I could make one in about an hour.  After all, what guy doesn’t want an excuse to do some woodworking and make something “cool”?

Last Bulk Trash Day, a neighbor had sent me on a month long trip of woodworking joy.

I had seen a project on Kickstarter called the iBamboo Speaker and thought that it was so simple that even I could build one.  So after mulling it around in my head, I decided that I would try it if ever I came across some suitable bamboo.

It turns out that suitable bamboo was growing in a neighbor’s yard and when they cut some of it down to throw it out, I grabbed two six foot lengths of the stuff and took it home.  What you need is bamboo that is roughly the size of your wrist.  You also need time, a miter box, some hand tools, and you can build one of these things in about an hour or two.

I suggest if you really do want to try this, cure the bamboo either by air drying or in the oven at 212F for at least 4 hours.  That will harden the bamboo lumber.  If you get cracks, it will be before you invest a lot of time in your work.  One of my tablet sized docks split lengthwise so that one will remain mine. 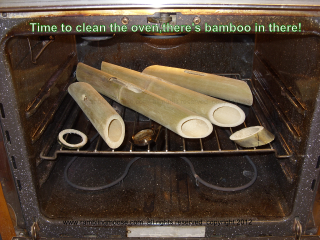 By the time I ran through all of my bamboo, I had made these four plus a couple of failed projects and some variations on the theme like a “supersized” one for my tablet.

iPhones have only one speaker on the bottom plus a microphone port.  It doesn’t require separation of the channels, so I built my phone sized docks out of the smooth center of each “joint” of bamboo. 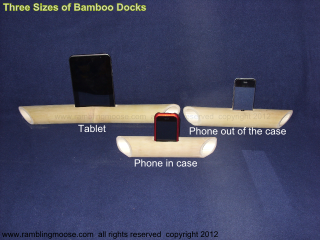 The tablet I have, Samsung Galaxy 2 7.0, has two speakers on the bottom, so the larger tablet docks are all built so that the tablet sits on the joint giving proper stereo separation.  Since tablets are larger, the extra length helps the dock stay upright because of the added mass of the bamboo.

These things actually do add amplification through resonance.  If you doubt that, find some music on your phone and put it speaker side down in a small bowl or large glass and you will see the result.  In this case, the bamboo just looks nicer.

The people at www.ibamboospeaker.com will sell you their speaker docks online.  Theirs are more polished, using lasers to cut the holes and so forth.  I used an old hack saw, leatherman tools and built them out in my back yard giving a “shop class” look.  The ones I’m going to keep will get finished and stained. The ones I’m planning on giving as gifts I may not stain, I haven’t quite decided yet what I will do there.  My friend who will get one has Android phones, and the speakers are not all in the same place. This means the mount hole for the phone may need to be widened “on site”.

A bit of Sunday fun in the back yard with sharp tools.  No, I did not run with scissors.

Why is there a block of wood in the oven?
It’s not wood.
What is it?
It’s bamboo.
Ok, so why is there a block of bamboo in the oven?
I’m curing it.
Was it sick?
No, but it was green.
Green?
Yes, fresh cut, full of water.
Is that a problem?
Yes, if you work with green bamboo it will crack.
Oh, that is a problem.
So how long are you going to tie up the oven?
Until noon, I’m going to make some Quesadillas and I’ll need the oven then.
You are going to take that block out aren’t you?
Oh yes.
How does it smell?
Like England, Green and Pleasant.
OK, you’ve been watching BBC America again haven’t you?
Of course…

What happened was that last week on Tuesday our neighborhood had Bulk Trash.  It’s one day a month when the most magical of all trash days happens.  Our neighbors toss out all the big stuff that won’t fit in the big blue bins.  Later when everyone is away, the Magic of the Trash Claw happens and it all disappears.

A Big open truck with a giant claw on an articulated arm comes and grabs the giant piles and puts then in the hopper.  Then, it moves on down the road to the next pile and so on.  Really quite fascinating to watch and some of those folks on the truck are quite amazing.

Here in Subtropical South Florida, we have to keep after our yards.  If you blink, a day after a rain storm, you actually see growth.  Since it is tropical, we can grow all sorts of things that “regular” places can’t like Orange Trees, Mangoes, Lemons, and Bamboo.   Bamboo can be quite pretty, as Chinese and Japanese art would evidence, and the dancing of the leaves on the breezes can be rather poetic. However it is quite prolific and will easily take over your yard if you don’t get out a machete and hack it down.

The neighbor had a pile that was 4 feet tall and 8 feet square full of bamboo cuttings.   Some of the bamboo was as thick as my wrist.   Being someone who is always looking at things and applying them to some new and intriguing uses, we grabbed two 6 foot long sections of some of that “construction grade” bamboo for later use.

But you just can’t work with it until it cures because it will warp, crack, and be subject to insect damage.

So the recipe as best I could figure was simple.

Cut your bamboo down to “workable lengths” that will fit in your oven.
Heat oven to just above boiling, 105C or 220F.
Place the bamboo on the rack so that air can get to all of the bamboo.
Every hour, rotate the bamboo to avoid spotting or warping.
After 4 hours (or more) you can remove the bamboo.

There, aren’t you happy you learned this?  After all, what else are you going to do with scrap bamboo from the neighbor’s yard, build something?

Yes, until I run out of the stuff.  Then I will wait for the next Bulk Trash Day and …