The easiest plant I have found to propagate is the Ruellia.

They are also considered invasive weeds by some.

One of those things I guess, the butterflies and bees love the flowers, but the plants get out of control and will grow just about anywhere in the South.  Zone 8 to 11 if you’re taking notes.

I guess I shouldn’t propagate them, but since my entire property line on the East side is covered with them, they aren’t going anywhere.  I get an almost 100 percent propagation rate from cuttings stuck in damp soil, and they make for a rather nice display in a pot.

I had this pot, one of my Rescue Pots where I was planting all sorts of stuff to see if it takes.   When I got a care package of some Mexican Milkweeds, I tossed the seeds into this pot and waited.

Nothing.  Nothing took.  That was back in March.

Shrugging, since I needed to trim back the Mexican Petunia a couple of lawn mowings ago, I simply saved the 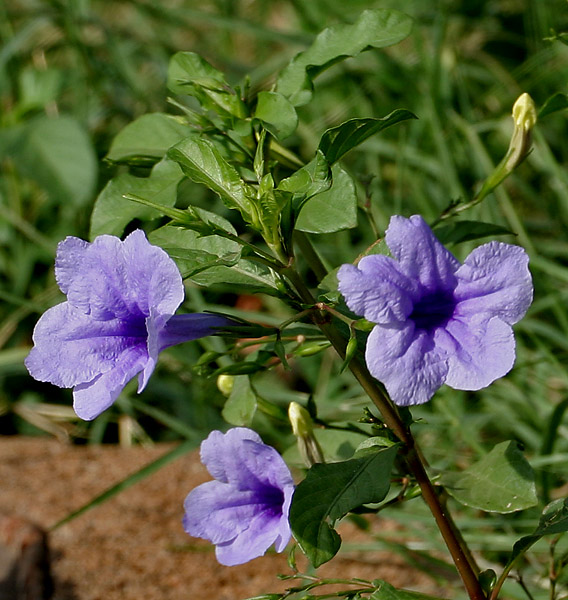 cuttings and stuck them into the soil of that pot, densely.  Now the pot has this giant tuft of purple flowers and green leaves.

In the middle of that pot there was one odd ball Mexican Milkweed.  I could tell it was that because the leaves were not as dark as the Ruellia.  The leaves are almost identical, but it looked faded.

With my puttering in the garden each day, I thought it odd that my Milkweed had grown back healthy after being eaten back to sticks by all the Monarch Butterflies we have here.

Momma Butterfly found my lone plant in the strawberry pot.  She missed the one in the Ruellia.

I shortly had three little baby Monarch caterpillars munching my plant to sticks.  “Oh Well, That Is What It’s There For!” I said, promising myself to watch after my tiger striped pets.

A couple days later, they grew so big that they ate themselves low on food.  One of the caterpillars got hungry enough to try to escape the strawberry pot.  I saw it on the outside of the pot looking lost.  It immediately climbed onto an offered Sea Grape leaf that I picked up from the ground.

You guessed it, it went into the pot with the Ruellia.

So now I have caterpillar number 3 getting fat and happy with the Ruellia, which it seems to have a taste for too, as well as the other two back on the lone Mexican Milkweed that now is almost leafless.

Good riddance day is a day where you were to gather up your old mementos and take them down to the big shredder truck and have them mulched into oblivion.   Nothing like a little bit of revisionist history to salve the soul, right?

It’s not a bad idea.  Cintas was there with a big truck that you could dump old pictures and have them shredded as well as old love letters and other paper objects.  The idea is that you put all those bad old memories into the box and they come out ready to be recycled.

I remember seeing this sort of thing in a sitcom years ago.  The female lead had just broken up with the boyfriend and instead of cutting his face out of all of the pictures, or using wite-out to blot him out, she gathered up all of the bits and pieces like pictures and letters as well as a teddybear or two and put them into a trash can.  If I remember the story right, she set the can in the middle of the room, tossed in a match and of course the fire got out of control.

This being a sitcom, the woman hooked up with the fireman who came to put out the fire.

Repeat after me… Awwww how cute.

That moment of “squee” aside, its not a terrible idea if it helps you to move on to purge the physical echos of a bad memory.  While you’re at it, it is also a good idea to grab those old bank receipts from the 1900s and shred those.  Anything older than 8 years is of questionable worth anyway other than Deeds or Titles.  You certainly don’t want to shred your mortgage paperwork until the debt has been cleared, but the Charge bills from your trip to the Beach back in 2001 is not really needed.

I just had this mental thought of hundreds of jilted New York women standing in line with big boxes of papers commiserating over their old relationships and vowing to start fresh in 2011.

Like many people, I’ve said good riddance to the last few years.  Between world politics, local politics, and other disappointments, things in general have gone with the economy on the broad view.  That is to say, not very well.

But hopefully we can all just say Good Riddance to it all and 2011 will be the beginning of the next great boom in the economy.

Sure, and we’ll finally be able to come up with a fair progressive tax policy in the US and the world will be full of butterflies and teddybears.

Ok, the butterflies are plentiful in this part of the world at least.   Just yesterday I was out inspecting the flowers and saw another Monarch Caterpillar on the Mexican Milkweed and …

And maybe not profit either…

Yesterday I walked out onto my porch and surveyed my domain.  It was quiet, the sun was out, there were birds on the wing.  The Parrots were squawking in a nearby fruit tree looking for their next meal.  All looked right with the world.

I noticed that I had an “air plant” growing in my bottle brush tree in front of the house that was the size of a small melon.  As I looked down to step off the porch I examined my cactus that I have in two pots there.  It wasn’t the best sight.  Having been two days since the torrent of rains stopped, things had for the most part dried up.  The cactus still had a little water in the ceramic pot they’re in, I could make that better by drilling drain holes, but they almost never get any water where they’re at.  That they had water in them at all shows how hard it rained over the weekend.

Or as a friend here would say “I need Le Ark to avoid Le Flood”.

Looking into that puddle I spotted something moving.  Wrigglers.  Mosquitoes.  With a shudder, I picked up the pots and drained them one after another.  That’s part of the problem living in the tropics-adjacent.  Mosquitoes and other invasives don’t die out over winter cold snaps.  This year it got cold enough to kill off most of the iguanas, but they’re coming back to dine on my bougainvillea plants until I find that Special Food to send them on their way.

Mosquitoes will breed in a tablespoon of water inside of a leaf.  My backyard and my neighbor’s are a perfect example of that.  I’m used to seeing them because my hedges that afford me so much privacy are so lush that I can’t clean them out properly to get all the leaf litter.  There are so many that I turn on a fan to use the pool in the late evenings so I can blow them South.  Fort Lauderdale can have them.

This morning after I walked the dog, inside the house I was standing in the kitchen eating a chicken patty on a biscuit and watched the mosquitoes bang their brainless heads against the glass trying to turn me into a meal.  That was when I noticed that my “Lucky Bamboo” had wrigglers in it as well.   That was a first because I usually don’t get them in the bamboo.   There are two tricks you can try if you keep lucky bamboo or any other potted plant.

One is to get a betta fish and put it in the jar with the plants.   Mosquitoes will breed in the water and feed the fish.  There *is* a third element to that little cycle of life, but I’m not certain what it is – so research it before you try that one.

The other is what I have been doing for decades.  If you are plagued by mosquitoes in your lucky bamboo, or any other potted plant, drop a few copper pennies in the jar.   It interrupts the mosquito’s life cycle and they never live long enough to become nasty biting creatures.  Simple and basic, and I’m sure we all have a penny jar somewhere that we won’t miss a small handful to fill the pots in the yard.  I did that a long time ago and it does seem to help.

In my neighborhood, a block away from my house, there’s a little “Vest Pocket” park.  I’ve spoken of it before, it is named after one of the more entertaining people that I have met in this town, M.E. DePalma.  On an Island of entertaining people, to be at the top of that particular list is indeed a feat.

The other day I was walking Mrs Dog past the park and there was someone weeding the park, and a dog tethered to that ugly FPL Fibrenet warning post that they put there so I started to weave into the park.  Being horrible with names and not seeing his face, I walked a wide circle around the person manicuring the ground cover past the remnants of the Mexican Milkweed and toward the far part of the park so as to let the very friendly golden retriever have her space.

When I passed he looked up and looked familiar, and being abysmal with names, I knew I knew him but was admittedly sheepish.  I had passed him and was on the way out of the park and ran into M.E. DePalma getting ready to do some more weeding.  She and I were talking about various City events and we both commented on the Milkweed. There are so many Monarch Butterflies in the neighborhood that those plants are constantly down to stumps.  Skip, Her Partner, and the person who was on the other side of the park was saying at a loud voice “Go away Butterflies, let those plants grow!”.  Amusing and ironic that in a butterfly park you have a problem with too much of a good thing.

My Milkweed on the other hand are doing quite well.   The monarchs are finding that the butterfly park has tastier nectar and pollen and are laying their eggs there while flying through my yard to get there.   I sit in my living room and can see a parade of monarch butterflies float past the front window on the way to the park.

We’ve got a good thing going there.  It was a property that was too small to be “economic” to develop, and given to the city for this park.  I’m glad it is there, and so are the butterflies.

We’ve got a whole lot of these flowers all over the yard.  They grow like weeds.   Cut them and stick the stem in moist soil and they almost always “take”.

They’re called Ruellia or Mexican Petunia.  They’re also basically weeds but they’re pretty.   I get annoyed every so often when they try to take over the yard and the Japanese Yew or Podocarpus, but slice them and they always come back.